Getting the right battery for your fish finder is critical to keeping it working while out on a kayak fishing trip.

So what is the best kayak fish finder battery? I’ve found that the best battery for kayak fish finders is the Chrome Battery SLA Max 160. Out of all the batteries I’ve looked over, it’s the one that will do the job for most people and also doesn’t cost a lot. It has enough capacity to provide the average fish finder with one to two days of power, which isn’t as long as some of the larger batteries, but it keeps the weight and cost down to a more manageable level.

The capacity of the battery is definitely the most important consideration when choosing one for your fish finder, but there are a few other technical points that shouldn’t be overlooked. Fortunately, I’m here to give you some tips for finding the correct one for your needs. 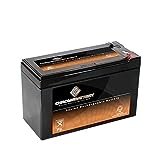 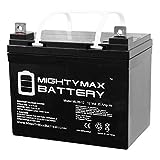 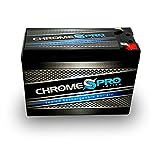 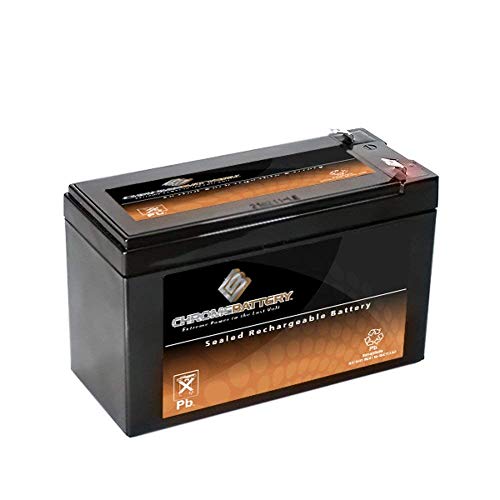 The SLA Max 160 from Chrome Battery is about as basic as they come. It’s a very inexpensive sealed lead-acid battery with an absorbent glass mat to keep all of the electrolytes in place. The terminals are simple F1 tabs, which are easy to connect to the wiring on your fish finder. The Max 160 has a 7 amp hour capacity, which is about enough to power most fish finders for twelve hours or so.

The Max 160 is a good choice for anglers that don’t want to spend a lot of money and don’t need much capacity. You will need to remember to charge it after every full day of use though; otherwise, there’s a good chance you’ll arrive at your favorite fishing hole with a dead finder. 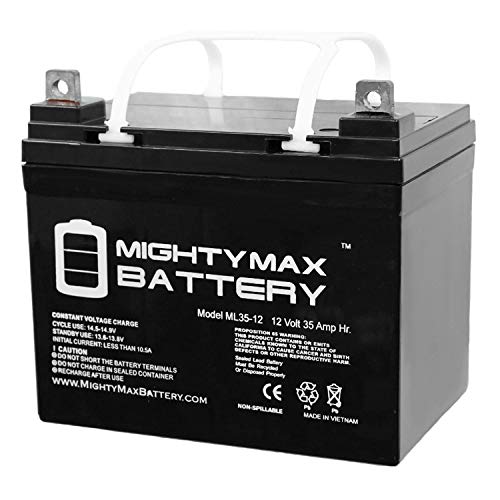 Compared to most of the batteries on this list, the Might Max 35Ah is a beast of a battery. The main advantage to the Mighty Max is its superior capacity of 35 amp hour. This is about five times the capacity of most sealed lead-acid batteries. The typical fish finder will run for about 70 hours or more.

If you’re wondering what you could possibly do with all that extra capacity besides run your fish finder for months at a time, consider that you’d normally need a second battery to run a trolling motor with your kayak. If you’re willing to forgo using the trolling motor and the fish finder at the same time, you could get away with just one of these batteries. The Might Max won’t power a trolling motor for long though, expect to get just one full hour of use if you’re using a 35 lb thrust motor.

The Mighty Max is overkill for most consumers, but it might be a good option for those that always forget to charge their devices or need some extra juice to run a trolling motor. 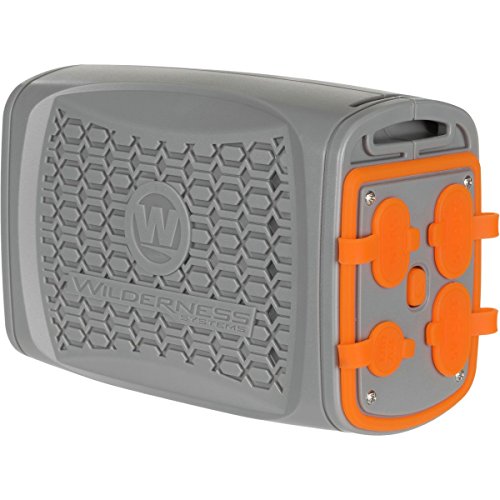 Wilderness Systems is a leader in the kayaking industry, so I’m really happy to see that they’ve come out with a dedicated power pack for their boats. Their battery has a more refined appearance compared to most of the batteries on this list as it comes with its own waterproof housing.

It has a couple of nifty features that put it in a class ahead of the competitors too, like LED lights to show when the battery is charged – no more guessing about how many hours you’ve used it and whether it needs to be plugged in before the next trip. The housing is also equipped with some power points for charging your phone or other small devices.

One of the major complaints with the Wilderness Systems battery is that it has a very sensitive overdraw protection system. This means you need to be very careful with the kind of fish finders you attach to it; many of the higher draw models can’t run off of it. Given that this is a rather expensive battery, you might expect it to work with a wider range of fish finders. 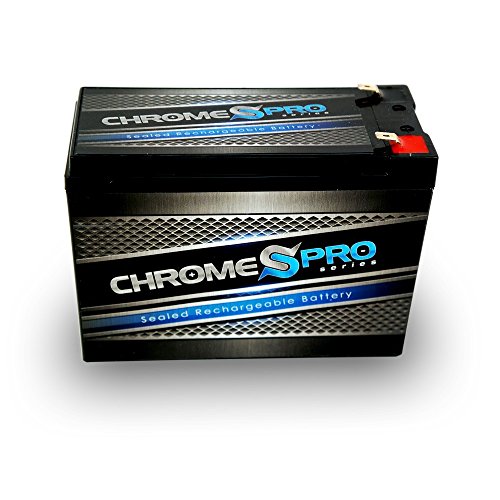 This model from Chrome Pro is essentially a larger version of the 7 amp hour Chrome Battery. That extra three ampere hours is critical though, if you want to take this battery on a weekend trip; most users will find that ten hours is enough for three solid days of fishing.

Fortunately, the Chrome Pro also does an excellent job of holding a charge when not in use. The absorbent glass mat design means you’ll never need to refill electrolytes if it goes unused for a while and there’s no caustic chemical sloshing around inside it.

Like most of the sealed lead-acid batteries sold for fish finders, the Chrome Pro does not come with a waterproof battery box, so add that into your budget when deciding which one to get. The Chrome Pro is slightly more expensive compared to similar battery models, which means you’ll need to think about whether those extra amp hours are going to serve you well or not. 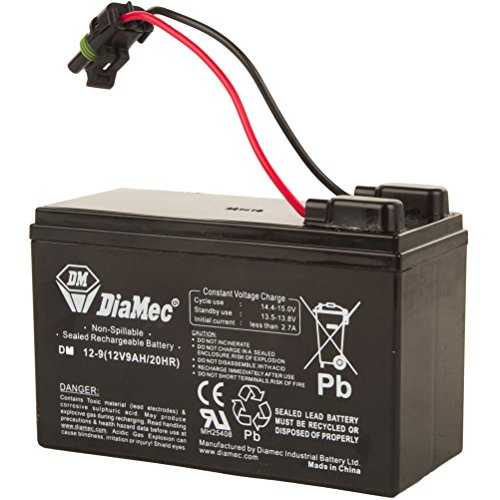 Hobie is at the front of the pack when it comes to fishing kayaks. Their pedal drive system is one of the most innovative features to hit the market. If you’re already using a Hobie fish finder or plan to get one in the near future, you can rest assured that this battery will work with it, something that can’t necessarily be said about other battery models.

This battery comes standard with a connector cord that has watertight terminal covers, something you don’t see on any of the other sealed lead-acid batteries. Additionally, the Hobie has a better than average 9 amp hour capacity, which is just about enough to pull off a long weekend of fishing.

There are a few niggling problems with Hobie’s battery though, the first of which is that it doesn’t come with a charger. It also costs about twice as much as similar sealed lead-acid batteries, and given its high price point, it would reasonable for it to come with a charger.

It also doesn’t have a battery box, though the included connector cable does a decent job at keeping moisture out. Most users will still want to purchase an aftermarket box to keep it safe though.

Fish finders are pretty standard on larger motorized boats, but kayak anglers have been a bit slower to adopt them.

One of the biggest reasons for this reluctance, beyond the effort of mounting the transducer and display to the deck, is the need for an onboard battery. Some paddlers might be uncomfortable with putting a power source inside their boat where it might get wet or electrocute them. Fortunately, these fears are unfounded, as batteries designed for fish finders are sealed and safe from moisture.

Others are apprehensive about the weight and volume that all this extra gear will add, which is a valid concern. However, the batteries for fish finders are meant to easily fit inside the hatches of most recreational and touring kayaks.

Let me start off by saying you cannot remove the battery from your car to power your fish finder. The battery that starts your car is referred to as cranking or starting battery. It’s meant to release a large amount of power very quickly to get the engine running. This causes the alternator to spin and recharge the battery.

The battery only needs to work for a few seconds. Cranking batteries are not designed to be run down though; leaving the headlights on overnight and jumping the battery in the morning shortens its life.

Contrast this with a fish finder, which requires a very small amount of power at any one time, but uses it over an entire afternoon. This is where deep cycle batteries excel; they are made to run from a full charge to empty, day in and day out, without any loss of capacity.

For the longest time, sealed lead-acid batteries were the gold standard of deep cycle batteries. They were reliable, put out a decent amount of current, and most importantly, were fairly inexpensive. The one problem is that they take up a lot of space and weigh quite a bit. The batteries used by most fish finders weigh about ten pounds. For a motorized boat that’s nothing, but for a kayak, that amount of weight can change how it handles.

If you’re worried about loading a plastic brick containing highly corrosive acid into your kayak, don’t sweat it. The batteries are completely sealed and the electrolyte is often contained within a glass mat that prevents any sloshing around. Unless you happen to puncture it, there’s no risk of acid discharge.

Nickel Metal-Hydride batteries used to be common (along with the less environmentally friendly nickel-cadmium batteries), but they have largely been replaced by lithium-ion as they’re about half the weight of metal hydride and about a sixth of the weight of lead-acid models. They’re the same type of battery you use in your cell phone every day, just larger.

No matter which type of battery you buy though, know that they are usually not waterproof. You’ll need to purchase a separate housing for that and make sure that the housing has the proper cables to attach to your fish finder.

Most of the fish finders that you would consider mounting to your kayak will draw less than one amp per hour, with many using only half that much power. If you’re willing to charge your battery after every outing, you probably won’t need anything bigger than a seven amp hour battery.

If you’re venturing off into the wilderness for a multi-day camping trip with no access to electricity then you might want something larger like a fifteen amp hour model.

Fish finder batteries are usually pretty low-key, especially the lead-acid variety; they have a couple of terminals on top and not much else. A few models come equipped with helpful add-ons though, like an integrated waterproof case or a set of lights to show how charged the battery is.

These are handy to have, but aren’t critical for successful fishing experience and they can add quite a bit to the cost. Don’t buy a battery that has features you don’t need. Conversely, buying a battery without necessary features like a charger or watertight box means that you’ll have to spend more on top of the battery cost and do some research to make sure all the parts are compatible.

My Choice for the Best Kayak Fish Finder Battery

If you’re using a fish finder that doesn’t draw a lot of power and enjoy a sleek design with lots of features, the Wilderness Systems battery could be a great option. However, those that aren’t very conscientious with their charging schedule might do better with a bigger battery like the Mighty Max.

Most consumers will be just fine with Chrome Battery’s Max 160 though, my top pick for the best kayak fish finder battery, as it has plenty of juice to get you through one or two days of fishing. When embarking on a weeklong outing, you’ll need to pack the charger and see if you can plug it in at a campground.