It’s a question everyone asks when they first go to a ski resort and see rows and rows of skis and snowboards casually leaned up against a rack and abandoned: wouldn’t it be easy to steal those?

Hopefully it’s a question asked out of concern, not entrepreneurialism, but either way, the answer is the same: yes, it would be incredibly easy to steal those. Unless, of course, they’re locked up.

So what is the best ski and snowboard lock? Based on its balance of efficiency, affordability, and function, the best lock is the Safeman Multifunction Quick Lock. It will give you the greatest peace of mind without weighing you down physically 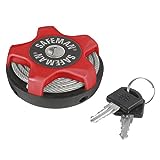 Reviews of the Best Ski and Snowboard Locks 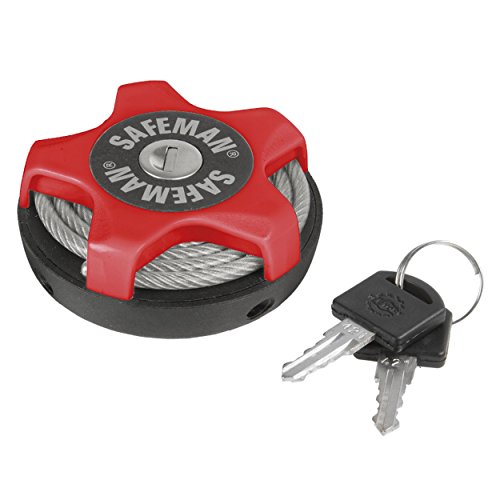 Safeman has the ethos of an established brand. They specialize in safety equipment, and it shows in their sturdy design.

This lock weighs around 4.5 ounces, which is a pretty small trade to make for the increased density of the cable when compared to my following pick.

The Quick Lock is also versatile: you can create two loops out of the cable rather than just one, which would be especially nice if you plan on skiing with a partner.

Because it uses a key, you don’t have to worry about this lock having an internal issue that causes the cable to get stuck, as some people have reported with the coded locks. On the other hand, you better make sure to zip up your jacket pocket, or that key might end up under a layer of pow.

This lock comes in red, blue, and white. 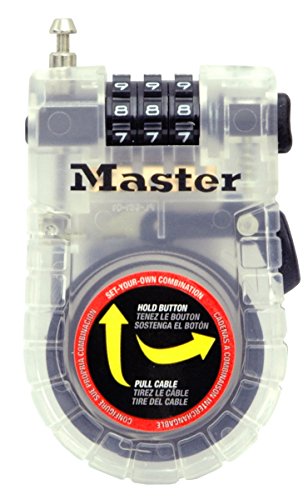 This lock is incredibly similar to a dozen or so other brands, but I chose it as my budget option because of the credibility of Master Lock and the fact that this product is within their given industry.

One of the most popular locks in the same price range and style is made by Dakine, for instance, yet the ski retailer has been far outsold by its sage competitor: the Master Lock Cable Lock has three times more reviews than any other comparable product. Quite simply, people use it, and people tend to like it.

The majority of negative reviews on this product are based on the fact that the cable can easily be cut. This is an issue you can’t solve without doubling the price of the product and losing a degree of convenience.

The major benefit of having a ski lock is that it acts as a deterrent, and Master Lock does the job, with 3 ft of cable that can easily wrap around two snowboards or a family of skis, and a minimalist design that weighs only 3.5 ounces and requires no other components.

This lock comes in clear, green, blue, and red. 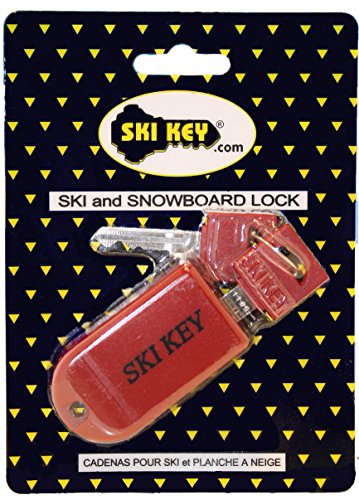 If you’re feeling discouraged by the fact that any cable lock has the potential to be cut, this lock from Ski Key offers a great alternative. This purchase would come with a key and only a key (or two, or three): the company has partnered with dozens of ski resorts in the US and Canada that stock a compatible rack.

Instead of latching your ski to the rack with a cable, this key would lock your skis into the rack itself. It’s an incredibly simple system, but the only problem is the aspect of convenience. Not every resort has these racks, and those that do, don’t necessarily have them everywhere on the mountain.

If you plan on buying Ski Key, make sure you do your research ahead of time. You can find a list of mountains that purchased the Sky Key Rack System in the US by following this link.

There’s one thing that perplexes me about Ski Key, though. I imagine it has to be a universal match between every key and every rack, and if that’s the case, I don’t see why ski thieves couldn’t hypothetically just buy a key themselves.

Do I Really Need a Ski Lock

While there isn’t a simple answer to this question, a Reddit thread reveals some pretty surprising statistics about how often skis and snowboards really are stolen.

Of the 286 people who responded to a post about ski theft, 22% had experienced equipment theft (8% skis, 15% poles, and 4% snowboards), and 49% at least knew somebody who’d had something stolen.

While most ski locks, especially the affordable and lightweight ones, can probably be picked or cut, the deterrence factor alone is likely enough to protect your skis.

Since theft isn’t an outrageously common occurrence, it shouldn’t take much of an obstacle to stop a potential thief (especially since they’d have to break the lock in a very public place).

Still, there’s a wide range in the degree of protection that a ski and snowboard lock can provide.

The biggest difference in ski and snowboard locks may come down to the method with which you retrieve your skis. Deciding which is the better option between a physical key or a 3-4-digit code will probably come down to personal preference.

Just ask yourself, what is the more likely worst-case-scenario: that I lose the key, or forget the code?

If you have full faith that you’re impervious to such folly, a physical key does seem like the most secure option. That way, no one can guess your code…although, let’s be honest, if you set it as 1-2-3, that’s kind of on you.

The biggest reason to choose a key over a code is if you’re worried about the longevity of the lock.

With a key, your lock will last as long as you can keep track of the key.

Strength and Length of the Cable

One major feature to compare locks is the density of the cable, i.e. the ease with which someone could cut right through it.

The cheapest lock that I’ve included in my list would not stand up to bolt cutters, but couldn’t be sawed off with a car key or anything like that. With this product, it’s mostly the deterrent factor you’d be relying on.

Someone could still steal your ski’s if they wanted to, it would just probably be more work than they signed up for (and, callous as this may sound, they’d probably just move on to the next pair that isn’t locked up, anyway).

On the other hand, it could be argued that if you’re going to spend the money on a lock, you might as well buy one that’s as close to foolproof as possible.

Plus, if you plan on locking your skis up overnight, you lose the protection of all those watching eyes at the resort. The thing is, there really isn’t a cable thick enough to guarantee no one can cut through it.

If this sounds like a problem for you, the best solution is to ditch that type of lock altogether and think about trying the Ski Key, which locks your equipment into a special kind of rack at selected resorts, guaranteeing that they won’t be touched.

Finally, keep the length of the cable in mind as well. All of the locks on this list will fit around a ski and snowboard, but if you ski with your family or partner, you may want to think about buying one long enough to wrap around more than just your own pair.

My Choice for the Best Ski and Snowboard Lock

If you’re shopping for the best ski and snowboard lock, the odds are that you just want some peace of mind. Equipment theft isn’t an epidemic by any means, but it’s still an undeniable possibility, and it’s ultimately easier to trust a lock to protect your gear than it is to trust people to leave it be.

Because there is no perfectly secure lock on the market, though, and the closest thing requires a compatible ski rack only featured at some resorts, my top pick is the Safeman Multifunction Quick Lock.

If you do happen to ski or snowboard in resorts compatible with the Ski Key, it would be a great alternative choice.