When it comes to mountain biking, those folks in the 300 lb plus range don’t have a lot of options. It’s an excellent sport for bigger people, however, and I’ve put in the time to find the best mountain bikes for a 300 lb man. If you’re plus size, you need a great bike, and the cool part is that you might not be as limited as you think.

So what is the best mountain bicycle for a 300 pounds man? I think the Mongoose Aztec is the best for those in the 300 pounds plus range. It’s got a heavy-duty frame, excellent geometry for trail riding, and fat tires that make the frame capable of supporting additional impact during drops with a large rider in tow.

While a bit limited in options compared to lighter riders, big folks still have a pretty good selection at their disposal. Let’s get to it then with my favorite bikes for big riders, and then we’ll talk a bit about what you’re looking for and how to prep your bike to make sure that you get the most out of your new ride.

Reviews of the Best Mountain Bikes for a 300 lb Man 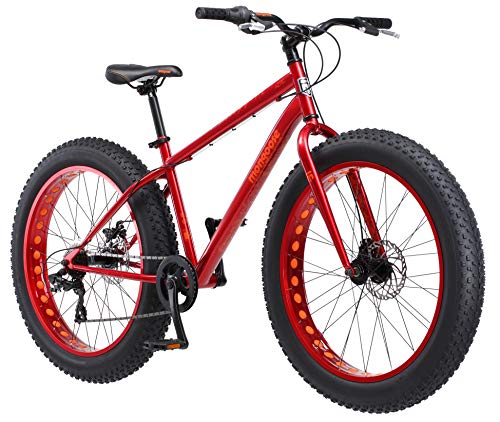 The Mongoose Aztec is a fat tire bike with the perfect geometry for those who have a bit of extra weight to carry around. The frame is stretched out perfectly for climbing while maintaining just the right amount of control during tight downhill sections.

The 4” wide, knobby tires that come with it are pretty much perfect. It might take a bit of time to dial in the right pressure for your size, but once you do, you’ll be fairly gliding over obstacles.

It’s a 7-speed, with only one front sprocket, but the gears run pretty well for both climbs and descents. It shifts smoothly as well, lacking the kick which low-end derailleurs often have. That’s a big bonus, as anyone who’s hit a trail on a cheap bike can tell you.

That said, the fat tires aren’t the best for handling, and this isn’t the kind of bike you’ll be able to easily throw around since it weighs almost 50 lb.

Still, for a 300 lb+ rider, I find it hard to recommend anything else. It’s got everything needed for a trail ride, and the sturdy frame, along with the 4” wide tires, makes it the best bike around for those who are pushing 300 lb on the scale. 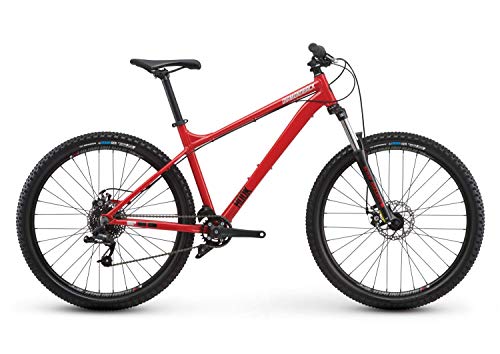 If fat-bikes aren’t your thing, and you’re not pushing over 350 lb, the Diamondback Hook is a fantastic option. The frame is well put together, with a thick lower bar that can support a surprising amount of weight.

It also has a more aggressive geometry than the majority of bikes, which are suitable for really big people. It comes stock with wider tires: the included set sits at 2.75”. The hardtail configuration makes it a wonderful bike for trail riding.

It’s best suited for beginners, but the frame is of high enough quality that you’ll be able to put the parts you want on it in the future. It’s a great way to break into trail riding for anyone, but it’s particularly well suited for 300-350 lb riders.

It’s rather expensive, however, and for riders who are over 350 lb, it’s not a great choice. You could probably manage with a new set of tires, but a fat-bike is really the way to go in that situation.

For those bigger folks who want to handle a lot of technical sessions, this is a great handling bike that can be upgraded when your skill level outstrips it. 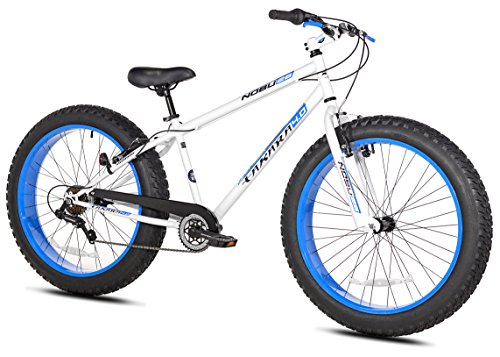 If you’re not planning on spending a whole lot and just want to get into some casual trail riding, then I found the right bike for you. The Takara Nobu Fat Bike is a great value for the dollar, but it’s not right for someone who wants to hit really technical trails.

The 4” wide tires are great for handling off-road terrain, and the bike comes in at a beastly 58 lb. It’s a monster of a bike, but it’ll hold a big guy’s weight easily, and it’s got the right geometry for hill climbing if you’re willing to put in the work.

There’s really no cheaper way to get into trail riding if you’re a bigger guy. The price is definitely right, but you’ll need an upgrade eventually if you’re planning on hitting trails that require more skills.

My biggest complaint is that it has wedge brakes. They’re usable on lighter trails, but it’s a big reason why the bike is cheap. Just be sure that you know how to adjust them as the pads wear down, and check them before any off-road rides.

The Takara Nobu is a great bike for those who aren’t sure they want to hit trails. It would also make a great commuter bike for larger folks who want to off-road once in a while. Just be aware of its limitations.

Mountain biking really is a sport that can suit just about everyone. It’s just a matter of making sure that you have the right bike to support your weight and height.

There are a few quirks that are specific to especially large people to keep in mind, however. Be sure to give this a thorough read when you’re setting up your bike and you’ll be flying down trails in no time.

In an unfortunate twist of fate, it’s pretty much impossible to find bikes suitable for riders over 300 lb for the majority of hyper-specialized mountain biking applications.

What most people think of as mountain biking (i.e.: riding down off-road, single-track trails) is actually called trail riding. I kept that in mind when looking for bikes for heavier people, as it’s the most accessible discipline in mountain biking.

Downhill and cross-country bikes really don’t exist for people in this size range. Likewise, trial bikes are also limited to smaller people for the most part. These specialized bikes are expensive and require extensive engineering; it just seems no one has bothered to do it for the particularly large among us.

That said, trail-riding bikes are suitable for a wide variety of different tracks. It’s only the specialization you’ll be missing out on.

While it’s not a big concern if your primary plan for biking is a commute, it’s important to find a great frame if you’re in the 300 lb+ range and looking for a mountain bike.

You shouldn’t be worried about the frame breaking when you sit down.

You should be worried about a cheap weld breaking when you hit the ground from a couple of feet and put an exponential amount of weight on the frame suddenly. A 325 lb rider, for instance, ends up exerting roughly 645 lb of force on the frame from a relatively small drop of 24”.

You’re not likely to do that on a regular commute, but that’s a relatively average drop for someone riding a trail.

Thickness isn’t the concern here: it’s the welds and material. Steel is ideal for heavier riders since it takes sheer forces much better than aluminum if all else is equal. Modern machining has made terrible welds mostly a thing of the past, but I wouldn’t want someone over 300 lb to risk frame failure on a run of the mill $100 Walmart bike.

18”-20” frames are usually fine for those who are of average to slightly above average height. If you’re over 6’, you may want to look for something in the 22”-24” range, depending on the length of your legs.

Fat tires are ideal, but not necessarily required, for a heavier rider. They distribute weight better and are generally run with lower pressures, which means that you’ll be applying less force to the frame during heavy landings.

Otherwise, you should be looking for larger tires when the ones that come with your bike wear out. Tires that are 2”-3” across are pretty much ideal for heavier riders who aren’t planning on getting into fat bikes.

More weight means that you’ll also need to run higher PSI than someone much smaller.

Standard mountain biking tires are usually run from 25-45 PSI on the trail, and near the maximum load when they’re not. You’ll want to run yours near the upper limit at all times to account for the heavier weight.

Fat bikes run much lower, with 10-15 PSI being standard for trail conditions. Run at the upper end of that and bring along a foot pump. Fat tires take a lot of effort to fill due to the higher internal volume, and if you need to add 1 or 2 PSI to get a better ride, then you’re not going to be happy doing so with a hand pump.

Never exceed the limits of the tires you’re using or you risk a blowout. On the other hand, if it looks like there’s a chance of pinching the tire or they start to act flat, you need to increase the PSI in the pump.

Running with proper pressures will make your ride much easier, just remember that you’re going to need to have more air than usual in the tires and you’ll be fine.

You should always be looking for disc brakes. Standard wedge brakes just don’t cut it for serious trail riding.

Mechanical disks are the most common and they’re bound to be cheaper than hydraulics. For general trail riding, they’re perfectly adequate and they’re much easier to repair if they get damaged during riding.

As a general rule, you’ll be using the rear brake to slow down during technical downhill sections where your speed may end up exceeding your skill level. The front brake, on the other hand, is primarily used to stop the bike once it’s reached a safe speed to do so.

Most commuters ride with a tighter rear brake. Those who’ve been commuting on a bicycle for some time often run their back brakes very tight to enable them to drop the bike almost immediately if something happens. The front brake is usually used along with it.

So, when you’re on the trail, you may want to run the rear brake a bit looser. If you’re particularly big, say over 300 lb, then you may need to run it tighter than smaller folks. It’s just inertia, but the difference will be relatively minor.

In the end, the settings are personal taste, but you’ll usually find that running a looser rear brake is better for trail riding, especially if you’re just beginning and don’t have perfect control of the levers just yet.

Look, I understand that many heavier people feel like they might be excluded from sports. Mountain biking is great for people of all sizes. However, you just need to put a little bit of thought into selecting the right bike.

For my money? The Mongoose Aztec is the best bike for a 300 lb man or over. The fat tires, excellent brakes, and relatively neutral geometry make for an impressive trail bike for anyone, but for the bigger guys, it’s pretty much perfect.

So, what are you waiting for? Grab the bike you need and hit the trails, you’ve got a lifetime of fun ahead of you.