Kayaking at the beach sounds both enthralling and terrifying – the opportunity to ride big waves, while also worrying about being swept out to sea. While magazines and TV frequently cover flatwater and whitewater kayaking, sea kayaking is rarely featured. That’s a shame too because sea kayaking can be one of the most exciting forms of paddling.

So can you kayak at the beach? Yes you can and, depending on the location, you don’t even need to be that experienced of a paddler. What you will need is a different type of kayak and some knowledge of ocean currents, which can be learned fairly quickly.

As someone that’s just getting into sea kayaking, don’t overwhelm yourself. Like anything in paddling, it’s a slow process with a lot to learn. Start small and work your way up slowly. Keep reading because I’ve got some great tips on how to do it easily and safely.

What is the Right Kayak for the Beach

If you’ve ever seen someone paddling in the ocean you probably noticed that their kayak looked very different than the kind you seeing running rivers. Boats used in the open ocean need to be designed for it, and rarely would you want to use a run-of-the-mill flatwater kayak for sea kayaking.

You should start by looking for long, narrow kayaks built for open water, like the Riot Kayaks Brittany. You won’t need the most tricked out sea kayak though, as these can have a bit of a learning curve. You’ll start with routes that stick close to shore anyway.

Get a Long Enough Kayak

Sea kayaks are long, like ridiculously long, compared to their flatwater counterparts. They’re usually longer than a compact car, which is an odd look when you put one monster kayak on the roof rack of one them.

In calm waters, like a sheltered bay or inlet, you can get away with a fourteen-foot boat – which is actually no longer than the average touring kayak. However, if you’ll be crossing a mile or more of ocean water, you’ll probably need something closer to eighteen feet to be comfortable.

They’re built long for a few reasons, the first being that they need a lot of displacement. Sea kayakers usually carry more safety gear and are likely to use their boats for extended trips that require camping equipment. They’re also designed to sit low in the water to make them less susceptible to the strong winds that sweep across open water; wider kayaks of the same displacement float a bit higher.

Having a long and narrow hull also just makes them easier to paddle. A bow with less surface area glides through the water easily, which is important if you’re paddling several miles in the ocean. However, your first sea kayak should probably be on the shorter side; dealing with the variable conditions of the ocean while figuring out how to pilot a big boat is definitely not a recipe for fun.

One of the first things you’ll notice when paddling a sea kayak is that they feel really tippy. The narrow hull allows the kayak to cut through waves rather than sliding over them, which would be an unpleasant sensation in an eighteen-foot boat. Their narrow hull is combined with a more rounded chine, the angle between the top edge of the hull and the center of the keel.

The rounded chine of a sea kayak makes for poor stability but allows you to roll the kayak almost to the point of tipping over and then popping back to an upright position – great for rolling after a capsize and bracing against big waves.

If you’re just starting out with sea kayaking, it’s best to get a boat with a less rounded chine and a wider hull, like this Riot Kayaks Edge model. It won’t be as fast or maneuverable, but you also won’t be spending half your time swimming with it.

Have the Right Accessories

There are also several accessories to look for when purchasing a sea kayak and an even greater variety of aftermarket gadgets to customize with. Just having a basic set of these fixtures will make kayaking at the beach a whole lot easier though.

Your sea kayak will already track much better than the average touring or recreational boat thanks to its narrow, elongated shape but even this aerodynamic design can be thrown off course by the strong winds encountered in open water.

A rudder is invaluable in these situations. Many novice paddlers incorrectly believe a rudder is supposed to assist you with turning; it’s actually there to keep you moving straight, counteracting the effects of a crosswind. Attaching a rudder to your sea kayak is sure to save on paddle strokes that would have been needed for course correction.

Having a comfortable seat is also a necessity, especially if you plan on straying very far from the beach. Unless you’re always hugging the coast, there are just not as many places to get out and stretch your legs. Therefore, most sea kayaks will have well-padded seats, fully adjustable backrests, and enough room to shake out your legs when crossing open water. 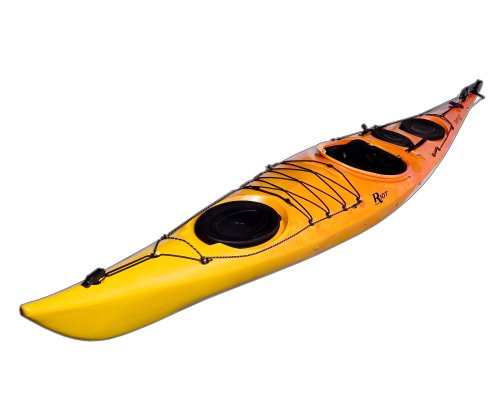 In addition to having the right gear, you’ll also need to familiarize yourself on things like tides, rip currents, and the dangers of dehydration and sunstroke that come with longer paddling trips.

The most obvious difference between sea kayaking and flatwater paddling: the tide. The ebb and flow of the tide might seem like a slow process, but it will have an outsized effect on your paddling whenever you’re kayaking at the beach.

First off, your put in and take out point can shift. Put in at high tide and you might find that the take out point is a hundred yards further from the vehicle at low tide, when more of the beach is exposed. In places like the Bay of Fundy, home of most extreme tidal changes in the world, low tide can expose an extra 2.5 miles of sand compared to high tide. Before taking a trip to the beach, always check a tide table for high and low tide times.

Tidal currents are also quite powerful; no different than a river current, a tidal current can push your kayak towards or away from the shore at a few miles per hour in some places. Such a constant force can make paddling parallel to the beach a real workout. It’s especially strong in narrow inlets or near the mouth of coastal rivers, like the Piscataqua in Portsmouth, New Hampshire that has a tidal current of close to 5 mph.

This is one of the most difficult skills to learn when paddling any type of water – visualizing the currents. Currents near the shore can be incredibly complex and are affected by all sorts of things like underwater obstructions, wind patterns, and water temperature.

Rip currents are one of the most talked about beach hazards and they can be just as dangerous to paddlers as they are to swimmers. Rip currents pull paddlers away from the shore and are usually too strong to fight against.

Large waves crashing against the shore circulate back into the ocean via the path of least resistance, which is often a narrow lane where the seabed below is particularly deep. If you feel yourself being pushed out to sea by a rip current, the easiest thing to do is just paddle parallel to the beach, which will quickly take you out of the current’s path.

Don’t Venture Out too Far

The first several times you go kayaking at the beach it’s a good idea to only travel as far from shore as you can swim. You could capsize and if you’re unable to do a roll, you’ll have to wet exit, then swim to shore or do a re-entry, neither of which is fun when you’re a mile or more from the beach.

Dangers from the Sun

One of the things you won’t find in the open ocean is shade. Unless you’re paddling very close to the shore and there’s some tree cover, you will be exposed to the full power of the sun UV radiation. That’s why, more than with any other type of paddling, it’s important to cover up when you’re sea kayaking.

Wear a hat, wear long sleeves, and cover as much exposed skin as you can. Anything that’s uncovered should be slathered in protective sunscreen of SPF 30 or more. Just make you’re covering up with lightweight clothing or you’re liable to have a heatstroke – which brings me to my next point.

Carry plenty of water whenever you go kayaking at the beach. Dehydration is a concern with any kind of physical activity, but when you’re sea kayaking, freshwater can be some distance away. A good rule of thumb is to carry a liter of water for every hour that you intend to be out in your kayak. Assuming you don’t sweat it all out though, you’ll need to expel some of that water. It pays to have a plan for bathroom breaks whenever your sea kayaking or you’ll need to get creative.