If you’re a big fella’, you know how difficult it can be climbing in and out of a kayak. Their cockpits are just not made for bigger bodies and longer legs. Fortunately, this problem does not extend to canoes, and there are plenty of models that are designed with the needs of larger paddlers in mind.

So what is the best canoe for big guys? My favorite one has to be the Old Town Discovery 199 Solo Sportsmen. While most canoes need two people to be paddled or at least paddled efficiently, the Discovery 199 is built for solo paddlers. With 350 lb of capacity, it’s suitable for the biggest guys and has a rather roomy and comfortable seat (with a backrest!) that will make long afternoons on the water a whole lot more fun. 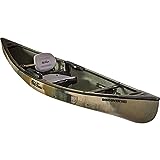 When you’re a big and tall guy though, there’s a lot to consider when choosing a canoe. It’s a big decision and, given the cost of canoes, not one to be taken lightly. Below you’ll find some tips to help you get through the buying process along with reviews of a few of the best canoes for big guys.

Reviews of the Best Canoes for Big Guys 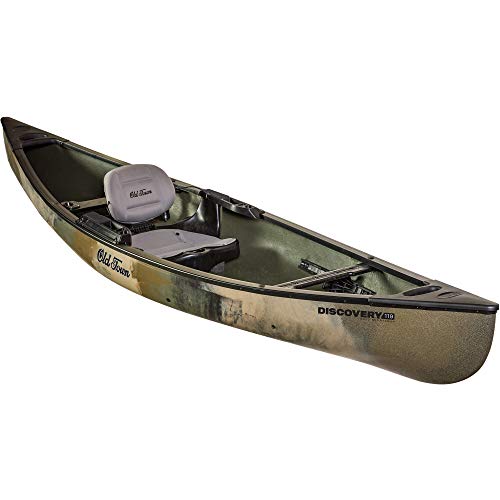 Larger guys often purchase a canoe that’s built for two or three paddlers to give themselves extra space and capacity, but there are definitely some downsides to getting a longer boat.

Unless you get a canoe with a seat at the center, paddling a longer boat is always a challenge and it will never feel balanced. The solution: the Discovery 199 Solo Sportsmen from Old Town.

The Discovery 199 has a capacity of over 350 lb, which is enough to carry just about any size of paddler. With a weight of 57 lb, it’s one of the few canoes that can be carried solo without the aid of a cart and its length of 11’9” makes for a highly maneuverable boat that performs well in smaller rivers and streams.

The Sportsmen version comes with two flush mount rod holders that can be used to set up a line or carry a fish finder, making this a great choice for anglers too.

One of the biggest differences between the Discovery 199 Solo and most other canoe models is the paddler’s seating. Instead of a bench, the Discovery has a full backrest seat, similar to a kayak, which makes it considerably more comfortable on longer outings.

It also has footpegs like a kayak, which locks you into position and helps to make your paddle strokes more powerful. The downside to this seating position is that the footpegs might not fit really tall paddlers. They’re designed to fit most people, but the whole point of getting a canoe for big guys is to avoid these types of restrictions, so it’s not for everyone.

The Old Town Discovery 199 is a good option for bigger paddlers that want a great canoe that isn’t too large to maneuver solo. It’s somewhat more expensive than similarly sized models, but you get what you pay for in terms of features with this canoe. 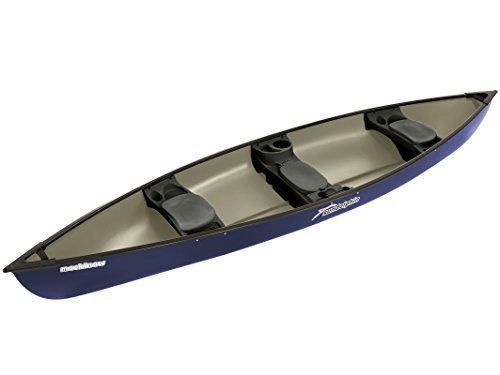 Sun Dolphin’s Mackinaw canoe might be one of the best options for big guys needing a budget-friendly boat. Due to its fifteen and a half foot length, the Mackinaw has more space than you could ever need and has a capacity to match.

It can hold 800 lb – more than enough for three large paddlers or two and heaps of gear. While it’s not always the best idea to get a big canoe if you’re unsure about how many fellow paddlers you’ll have, that extra space will at least give you some versatility.

All that size comes with a couple of downsides though, the first of which is that it is quite difficult to paddle by yourself; it’s just too long. When you’re going solo, the best thing to do is sit in the center seat, but you’ll still have eight feet of boat in front and behind you. It weighs nearly a hundred pounds too, so you’ll most likely need a cart to transport it to the put-in point if you don’t have a partner to help. Getting all that weight moving once you’re in the water is no easy task either.

There’s also the issue of the seats; they’re molded plastic benches and have no backrest. On longer trips, this is sure to be a pain in the butt (and back). On the other hand, this minimalist setup gives the paddler plenty of space to move around in, which is especially useful if you’re fishing and want to do your angling from a standing position.

As far as three-seater canoes go, the Mackinaw is a relatively inexpensive option. It doesn’t have all the bells and whistles found on pricier boats and it won’t win any awards for comfort, but it certainly holds a lot of weight without breaking the bank. 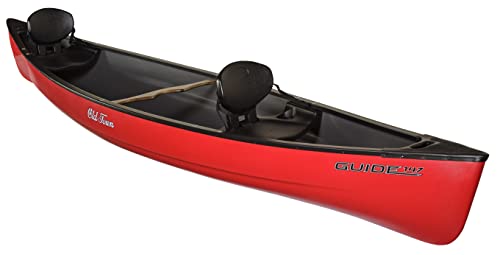 If you know that you’ll be paddling with another person, the Old Town Guide 147 might be the perfect canoe for you. The Guide 147 incorporates the comfortable seating of the Discovery 199 (backrest and molded seat) with the ability to carry two paddlers.

The downside to this is that there’s no easy way to go solo with it. The fourteen and a half foot length is unruly by itself, but since there are only two seats and not one in the center, you’ll need to pilot from the stern position. Surprisingly though, the Guide is one of the easiest canoes to transport by yourself as it has a convenient carrying yoke behind the seat, which allows you to hoist the boat onto your shoulders (all 82 pounds of it).

While canoes usually don’t have much of a learning curve, the Guide is a tippier model that can be off-putting to novice paddlers. Newbies will mistake its tendency to roll to the sides as a flaw, but it’s actually just part of its enhanced maneuverability. When making a turn, a little roll into the turn helps the boat to follow through and complete the turn faster. After a while, you’ll get the hang of it and know just how far you can roll without the risk of capsizing.

The Guide 147 is best suited for paddlers with a least some experience, as it feels too unstable for novices. It’s also not a good choice if many of your excursions will be done solo as you’ll have to paddle from the stern, which is more difficult. It’s an excellent option for paddlers that will always have a partner though, as the seats are considerably more comfortable and the canoe is incredibly maneuverable with more experienced paddlers at the helm.

How to Choose a Canoe for Big Guys – Buyer’s Guide

Shopping for the best canoe for big guys isn’t all that different than finding one for smaller paddlers. Just like a kayak for big guys, you’ll need the canoe to handle well, hold all your gear, and leave some room for customization, especially if you’re going to turn this into a fishing canoe and add a bunch of accessories. However, there are a few specific factors that look at when buying a canoe as a big guy.

The most obvious difference between canoes built for big guys and any other canoe is that it has to have more space and carrying capacity. The open-top design of canoes lends itself to bigger guys since you won’t have to climb in and out of a narrow cockpit.

Most canoes have ample legroom too, although their bench seats aren’t always comfortable for taller guys, requiring them to scrunch up their legs to get seated.

Husky fellas should also look for a boat with at least 300 lb of capacity, which shouldn’t be too hard to find as most canoes are built to carry two people. However, paddling a two-person canoe alone usually doesn’t lead to great performance.

One of the biggest decisions you’ll need to make when purchasing a canoe is how many people it will need to hold. If you’re a big guy and will regularly paddle with a partner, look for a model that can hold three paddlers.

If your trips are mostly solo, it’s probably better to get a canoe designed for solo paddling. Paddling a two or three-person canoe by yourself is no easy feat, however, it’s best to sit in the stern position if you’re going to do it.

There’s also the option of getting a three-seater and sitting in the middle when you go solo. This gives you some versatility, but three-seater canoes are often designed for a child to go in the middle, so it might not be the most comfortable seat.

This goes hand in hand with the previous points – bigger paddlers usually buy bigger (longer) boats, and this will invariably affect performance.

Longer canoes have better tracking, the ability to keep a straight line after each paddle stroke. They’re less maneuverable though, taking more effort to turn, especially when you’re paddling by yourself and not sitting at the center of the canoe.

If your trips are mostly on big rivers, good tracking is probably more important, while smaller waterways will require more maneuverability.

The canoe design reigns supreme when it comes to accessibility; the wide, open-top hull allows just about everything to be within reach of the paddler. But if you pick a canoe that’s too long for you, much of that gear will be out of reach, at least as long as you stay seated.

Make sure that the canoe you purchase has everything you need within arm’s reach and know that items behind the seat will be difficult to get at, especially if they’re sitting in the bottom of the hull space.

My Choice for the Best Canoe for Big Guys

While no canoe will be suitable for everyone’s needs, the Old Town Discovery 199 Solo Sportsmen is probably the best canoe for big guys if you’re paddling by yourself.

It’s easy enough to transport solo and has a comfortable backrest for longer trips. It has plenty of capacity, but since it’s less than twelve feet long, it won’t have as much storage space and probably isn’t the right choice for overnight trips.

However, if there’s a chance that you’ll have a frequent paddler partner, the Old Town Guide or Sun Dolphin Mackinaw are great alternative options, with the Mackinaw being the better choice if you need to paddle solo on occasion. The Old Town Guide is better suited for paddlers that will almost always have a partner, as it has no center seat to paddle from in their absence. It is considerably more comfortable though, and much more maneuverable.