For most rock climbers, or at least the ones that I know, the GriGri is the holy grail of belay devices. It makes life just that much better! I know that many will always choose the Gri for belaying over, say, an ATC like device.

While the GriGri is primarily a belay device, it can also be used to rappel, in certain situations. The ​​GriGri is designed and manufactured as a belay device for experienced belayers.

This article will serve as a guide, as to what a GriGri is, how it works and how to use it correctly for rappelling purposes. This guide is not intended as an instructional replacement for real, hands-on training with a professional mountain guide.

How to Rappel with ​a ​Petzl GriGri

While the GriGri is designed to be used as a belay device, it too can be used for descending applications, such as rappelling. It’s not quite the jack of all trades as is the ATC, and the options for descending with the GriGri are fairly limited.

Having said that, when it comes time to use the GriGri, it does shine.

What is a​ GriGri 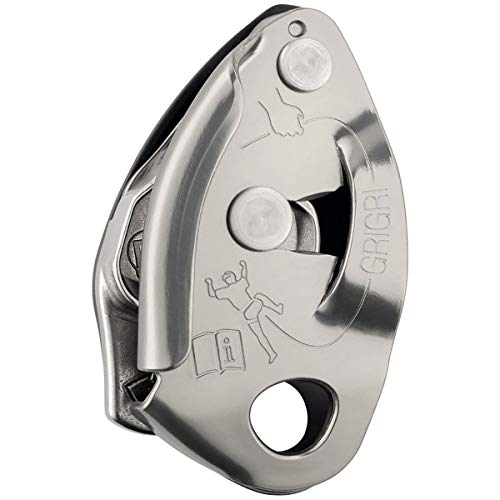 ​The​​ Petzl ​GriGri is a single-rope assisted braking belay device, designed and manufactured by Petzl. The assisted braking works in the way of a built-in cam that pinches the rope when it goes tight, which will, in turn, stop the rope from sliding through the device.

The device has a handle, which when pulled back on, will progressively disengage the cam, allowing rope to be fed through the GriGri. If the assisted braking on the device fails, and the cam doesn’t pinch, it operates the same as an ATC-like device.

​When Can You Use a GriGri For Rappelling

The GriGri, being a single rope device, can be used for any rappel situation where one single strand of rope is being used to descend. This is as opposed to an ATC-like device, which can fit either one or two strands of rope. Rappelling on two strands of rope is common when going back to the anchor to retrieve the rope isn’t possible.

Rappelling on a single strand of rope is common in the caving world, for example. A caver will rappel into a cave, and then ascend back up the same rope to exit. This is commonly done with the use of a GriGri and an ascender, something like the Petzl Ascension​, which we’ll discuss further in a moment.

A single strand of rope ​method of rappelling may also be used for:

The real positive of using a GriGri to rappel, though, is its assisted braking. This, when learned to be used correctly, can provide a very smooth and safe descent.

Limitations of the GriGri

As we’ve covered already, the GriGri can only be used with a single strand of rope. This can be somewhat limiting when rappelling, as many rappels are done by feeding the rope through or around an anchor, with both ends of the rope going over the edge of the cliff and down to the ground. In this situation, both ends of the rope will be fed into the ATC, and rappelled on. This obviously can’t happen with the GriGri.

This limitation makes it not quite the ideal device for rappelling in all situations, but then again, it’s not designed to be.

What ​Size ​Rope to ​Use ​With ​a GriGri

Petzl has designed the GriGri to be compatible with a single rope between 8.5 and 11 mm. I’ve used all rope diameters in the device, and while ropes on the thicker end (around 11 mm) do work, they run through a little rough, especially if the rope isn’t brand new. I’ve used old 10 mm ropes, and on humid days, it really can drag through and isn’t smooth at all.

The opposite happens on the lower end, with ropes around 8.5 mm, especially when brand new – they run through a little fast and the cam for the assisted braking has trouble engaging and really biting down on the rope. I find the sweet spot in rope diameter for the GriGri is 9 mm, possibly 9.5.

The GriGri for ​Belaying and Ascending

Though you absolutely can go in the downward direction with the Gri, it really comes into its own when used for going the opposite direction—up! Both belaying a climber and ascending.

Ascending, often called jugging, refers to ascending up a rope, often with the help of a GriGri ​and its assisted braking. If the rope goes tight, the cam will engage and lock the device off— the Gri is commonly used for this purpose. There are also many ways to ascend a rope, but it’s usually done with the use of an ascender or two and a GriGri.

​Related article: How to Rappel with a Figure 8 Device

Do I need to use a prusik with a GriGri

You do not need to use a prusik when using a GriGri. A prusik is used with an ATC to provide a level of redundancy. The GriGri, however, already has redundancy— it has the assisted braking cam and the curves in the rope like the ATC. If the cam fails and the assisted braking doesn’t engage, simply holding the brake strand of rope prevents any rope from moving through the device.

How to use a GriGri left-handed

Unfortunately, the GriGri is designed to only be used in one way— and that is with your right hand on the brake strand of the rope. Most left-handed people just learn to use the device the right-handed way and don’t have any problems. There are similar devices, like the ​​​​Mammut Smart Alpine, ​which will be more lefty friendly but don’t work in quite the same way.