What is the best GoPro mount for kayaks? My personal favorite is the Scotty Portable Camera Mount – a pole-mounted kit that fits into the rod holders that are already installed on your kayak’s deck.

This design is one of the steadiest setups for holding your GoPro and depending on which rod holder it’s placed in. The camera can record from behind you (giving the perspective of riding in the backseat of a tandem) or focus on your face, capturing your goofiest expressions when riding a big wave.

Table could not be displayed.

GoPro cameras are pretty amazing pieces of equipment; waterproof, shockproof, and small enough to fit into the palm of your hand, they’re ready to go anywhere that there’s action.

But to get the most out of the camera when kayaking, you’ll need a good mount – something that places the camera right in the heart of the action, while holding it steady enough to prevent nausea-inducing shots.

Making a great GoPro video is an art, though, and you’ll need to make some artistic choices when choosing a mount. Should the camera ride low in the water, catching waves as they splash over the deck, or do you prefer wider shots from an observer’s perspective?

Fortunately, you won’t need to make those decisions by yourself; Keep reading and I’ll tell you all about the best GoPro mounts for your particular needs.

Reviews of the Best GoPro Mounts for a Kayak 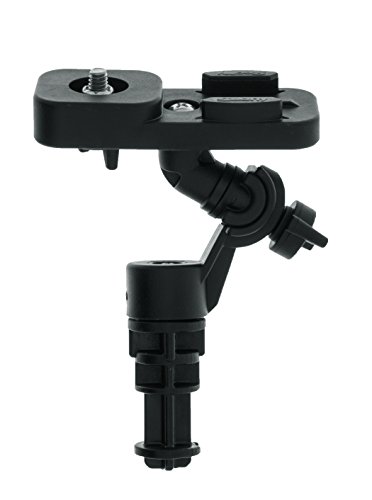 Scotty is one of the biggest names in fishing rod holder mounts, so it should come as no surprise that they make this excellent mount for holding your camera too.

Their 135 model fits nicely into the rod holder mounts that are already installed on your kayak, so there’s no need to drill any holes to get it set up.

The best thing about the Scotty 135, though, is the type of shots you can get with it. It comes with a long pole arm that extends out of the rod holder mount, which puts your GoPro at chest or eye level.

Videos taken with this mount have a first-person feel to them, or if you turn the camera around, you can capture all the great faces you make while paddling.

The ball head on the Scotty 135 gives you a lot of options for shot angles too, so you can frame the video perfectly for whatever you’re doing in your kayak (fishing, river running, surfing, etc.)

If you’re using your kayak for fishing and you normally have a few lines going at a time, know that the Scotty 135 will take up one of those rod holder mounts. Most boats have a few mounting holes, though, so this shouldn’t be a problem unless you’re using a few of them for gear like fish finders or an excessive number of rods.

The rod holder mount is a blessing and a curse in that it gives rock-solid shot stability, but limits the placement of the camera to just a few locations around the edge of the cockpit. To shoot video from the tip of your boat’s bow or stern, you’ll need a different mount.

For more varied shot angles, you’ll need a mount that elevates the camera above the kayak’s deck. That’s where the gooseneck on the Kupton Jaws mount comes in handy. You can bend this mount every which way to get the most interesting angles with your GoPro.

Similar to accessories like the flexible Gorilla Tripod that’s so popular with GoPro videographers, the Kupton uses an arm made from a series of rotating and interlocking balls to bend and hold your camera in just the right spot; the range of motion is unbeatable.

As you might expect with such a flexible gooseneck, though, even a small bump can bend it out of position. If you’re looking for good shot stability in rough waters, this is not the mount for you.

To attach the Kupton to your kayak, though, it has an incredibly solid clamping mechanism. This attaches the clamp to your kayak cockpit’s rim, and even if you end up capsizing with it attached, there’s no risk of the mount coming off.

Unfortunately, you are limited to mounting it on the cockpit rim, but the flexible gooseneck should still give you plenty of shot options. 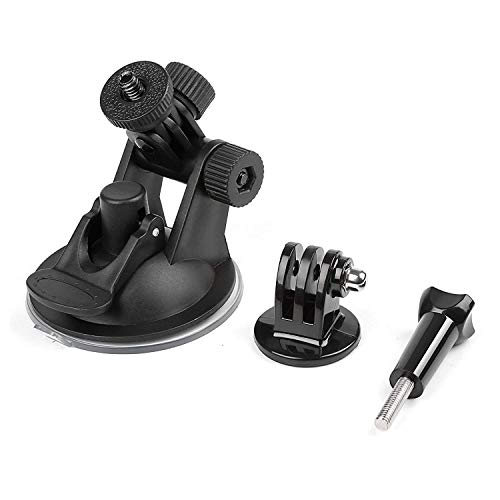 It doesn’t get any more basic than this suction cup mount; in essence, it’s a less permanent version of the sticky mount that comes with every GoPro model.

Cheap and easy to use, these mounts are the first addition to nearly everyone’s GoPro kit. Unlike some of the more complicated mounts, the suction cup can be repositioned in seconds and will stick anywhere on the deck of your kayak.

The biggest issue with these mounts is that you won’t get very interesting shots with them. The adjustable arm pivots in two directions and the ball head that attaches the arm to the suction cup has an excellent range of motion.

However, the perspective of your shots is restricted to a couple of inches above the kayak deck.

There’s also the chance that the suction cup could fail, especially if you’re paddling in whitewater or rough seas. The mount is not recommended for high-impact activities, so don’t be surprised if it falls off in the middle of a roll. Paddlers that are really concerned about losing their camera should attach a leash to the mount and their PFD.

You really can’t go wrong with having a suction cup mount in your GoPro toolkit, though. It won’t take up a lot of space, costs very little, and attaches to all kinds of surfaces. You will be limited in the kinds of shots you can get with it and it’s not suitable for rough waters.

How to Choose the Best GoPro Kayak Mount – Buyer’s Guide

You might assume that picking a GoPro mount would be a fairly simple affair, but there are a few key points you’ll need to consider before making a purchase.

One of the coolest things about owning a GoPro is the different types of shots you can get with it.

Helmet mounts provide a first-person perspective, mounting the camera on the kayak itself immerses you in the action of the water, while pole mounts let you record video from above or behind to give the impression of a friend shooting the whole scene.

Your first decision when choosing a mount is the kind of action you want to capture with your GoPro.

The simplest option is a sticky mount, which uses a removable glue pad or a suction cup to attach to your kayak. Since they’re mounted directly to a surface, there are usually not many options for different shot angles; they’re great if you want a first-person perspective, though.

A second option is a boom mount, which puts a rigid or flexible pole between the camera and the surface it’s being mounted to. The space between them provides for a lot more flexibility in shot angles and perspective.

Having a mount with a decent range of motion means more flexibility with your shots.

The sticky mounts that come standard with the camera have just a single axis of movement, tilt up and tilt down. More sophisticated mounts will have multiple points of adjustment like swivels and ball joints that allow for 360 degrees of movement. Even more flexibility is gained with gooseneck setups that let you bend the mount’s boom into whatever position is most appropriate for your shot.

When examining a mount’s points of adjustment, look for ones with a strong locking mechanism. Range of motion is useless if the mount can’t hold the camera in position, which leads me to my next point.

Gone are the days of handheld video cameras that took low-quality shaky footage. GoPro cameras use software to stabilize your shots and the videos can be edited in post-production to remove some jitter. But the best way to keep your video from nauseating its viewers is to keep the camera steady while it’s recording.

Some mounts come with bendable goosenecks or arms that fold up, but the best shots are taken with setups that allow you to lock down every last adjustment point once you’ve decided on a good angle. Also, look for lock points that don’t require any tools. No one wants to carry a hex wrench everywhere their GoPro goes.

My Choice for the Best GoPro Mount for Kayaking

As I mentioned earlier, finding the best GoPro mount for kayaking is all about deciding what kind of action you want to capture with your GoPro. Sadly, there’s no mount that can do it all, and unless you want to carry a backpack full of them in your kayak, some tough choices need to be made.

The Scotty 135 mount offers the best combination of stability and interesting shots. Attached to your factory-drilled rod holder mounts, the camera experiences minimal vibration even when you’re riding through big rapids or surfing a wave. The mount’s ball joint and swiveling base provide endless angle options and the post mount elevates the camera for a more natural-looking shot.

The suction cup mount is simply too limited in its angles and perspectives; without anything to elevate the camera above the deck, all of your shots are taken from right at the waterline.

In my experience, the Kupton Jaws Flex Clamp actually gives the most flexibility with your paddling shots. If you’re looking for shots from the waterline, there’s the option of bending the gooseneck down to where the camera is touching the deck, or you can keep it upright for behind the back footage.

However, the clamp isn’t as stable as the Scotty 135, and thus the video doesn’t look as professional. Go with the Scotty if you want stability along with flexibility in your angles.