What are the best snowboard boots for flat feet? Like with most boot fitting problems, the easiest solution is a heat-moldable boot like the K2 Maysis, which is my personal favorite snowboard boot for low arches.

Using soft plastics, the lining can be heated and molded directly onto the wearer’s foot – the boot will fit that specific foot shape comfortably. The K2 Maysis boots also come with a double BOA lacing system, which will make your life on the slopes much easier.

Flat feet (also known as low arches) can be frustrating for snowboarders. A lack of support in the footbed will cause a lot of foot pain and end boarding sessions early – even if the boot fits properly. While flat-footed skiers have plenty of options, there are frustratingly few solutions for snowboarders.

Realistically, a specific brand of snowboard boots will never be a total cure on its own – only snowboard boot insoles will provide flat feet the support they need. However, several boots are built for comfort, which can help with foot pain triggered by flat feet.

But, foot shape isn’t the only thing you need to think about when buying new boots. You should consider what kind of boarder you are and what boots are going to help your riding the most. So keep reading and I’ll provide more tips on how to choose the best boots for you.

Reviews of the Best Snowboard Boots for Flat Feet 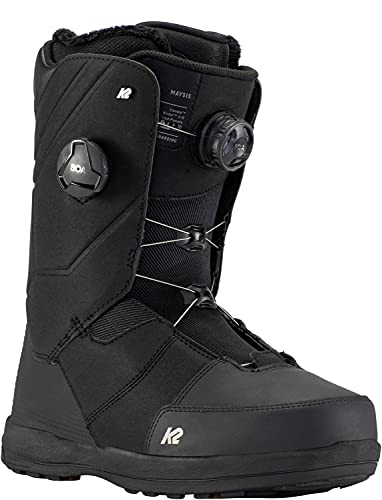 Flat footers who want to lay down aggressive carves need to look at the K2 Maysis.

The boot is good in terms of fit. It features heat molding, so people with irregular feet sizes don’t need to stress about poor fits. For comfort, this is a huge bonus – but the boot also uses Intuition Control Foam technology in the liner to keep strain around the leg down.

The double BOA lacing helps a lot, compromising between getting the boot on easily and removing pressure points. It’s easy to adjust – even when you’re still in your bindings!

It’s also a stiffer boot than others, making it a good option for hard carvers like myself who want to get stuck into their turns. I wouldn’t want to be wearing them on a park lapping day, though. 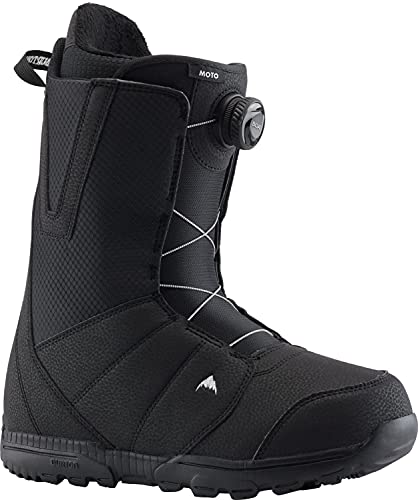 The Burton Moto boot has exactly the level of technology you’d expect from snowboarding’s biggest supplier. Cushioning and comfort are the two most relevant features here.

It has pretty hi-tech cushioning around the foot, providing support to flat arches and around the ankle. It’s also rated as a medium-low flexibility boot, making it a perfect first pair.

The BOA is far more convenient than lace-ups and more secure than speedlace, but being a single BOA, I’d anticipate some problems with pressure points.

It’s also very lightweight. You’ll be thankful for this after stomping around in them for a week. 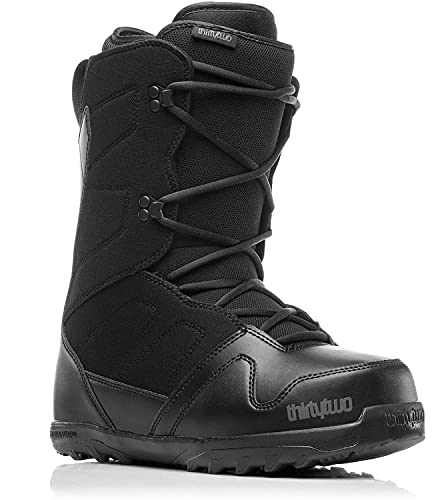 For those that don’t want to risk a frustrating BOA lace snap – or just like the look of old-school laces – the ThirtyTwo Exit boots can provide a traditional lace up. It also has a comfortable footbed, which will help with absorbing blows – a godsend for flat feet.

The high flex of the Exit makes absorbing hits from boxes and jumps a lot easier on the foot. Like the Burton Moto, it’s not a boot I’d wear in the backcountry, but it wouldn’t be too bad if you’re only staying a little bit into the off-piste.

It’s also by far the cheapest of the boots in this review. If you just want a boot for a few trips a year, instead of every weekend of the season, the ThirtyTwo Exit is a good choice for a snowboarder on a budget.

The most obvious thing to look out for is the size of the snowboard boot. While this tends to be less of a chore than fitting ski boots, it can still be tricky if you’ve never tried them on before.

The easiest system when ordering online is to just measure your foot in centimeters – that’s the “mondo” length of your foot, and almost all boots will have this measurement on them.

Some boots “run bigger” or “run smaller” – you may have to swap the boot in for another size if you order online, however, this process usually isn’t too painful.

However, the most surefire way to get a boot that fits you specifically is heat molding liners. A heat molding boot uses plastics with low melting points, which can be fitted specifically to your own foot shape while warm. While a flat foot is more of an insole issue than a foot shape issue, it definitely helps with comfort.

With your flat feet, this is going to be a big factor. A comfortable liner will go a long way to keeping you on the mountain as long as possible. A lot of technology goes into making boots as comfortable as possible, with each brand boasting cutting edge cushioning in the liners.

Proper support for low arches will come easier if you use these snowboard boots with inserts. Shred Soles in particular are known for being good for flat feet and are specifically designed for snowboarders.

After sizing, flexibility is the most important factor to consider when choosing a snowboarding boot. A stiff boot will give you way more control over the board, making it ideal for hard carves and precise backcountry riding. Flexible boots will be better for tweaking in the air and cruising with style.

Generally, a more flexible boot will have a more comfortable fitting, but they will put more strain on your leg muscles because you need to use more force to turn the board in carves.

Flexible boots, however, will absorb blows from landing jumps or jibbing on rails better, and put less strain on your joints and feet. Snowboarding isn’t known for being a gentle sport, so you should expect some soreness – but choosing the right boot for the right situation will help a lot.

As a rule, more flexible boots are made of cheaper materials (but not always lower quality!) and will be less expensive.

There is a variety of different ways to fasten a boot. Traditional laces allow you to have the boot tightened differently at the top and bottom – making the boot more comfortable. They’re less likely to create pressure points, which is helpful when dealing with pain stemming from flat feet.

On the other hand, they will lose tightness as the day goes on – I find having to constantly redo my laces throughout the day extremely tedious.

BOAs are the opposite – they typically are very easy to tighten up and don’t give you much of a problem in getting loose. But, they can create uncomfortable pressure points around the boot, which isn’t fun to deal with if you already have to suffer from flat feet.

Also, while traditional laces are pretty straightforward to replace on the mountain, a broken BOA lace will basically be a day-ender for you.

Double BOAs give you more control over whether the boot runs tighter and looser. They make it easy to get in and out of the boots, don’t make it difficult to re-adjust the lacing, and tend to not create the pressure points that single BOAs do. It’s a good compromise between traditional and BOA lacing.

My Choice for the Best Snowboarding Boots for Flat Feet

While the K2 Maysis isn’t the perfect boot for a total beginner, it ultimately doesn’t have the flaws of the other boots. It’s stiff enough that an advanced rider is going to make the most out of them – I love my euro carves!

The biggest issue for snowboarders with flat feet is going to be foot pain, and the double BOA lacing, as well as the comfort technology in the liner, are huge steps in fighting that problem.

However, this is by no means the only option – in fact, those who want to ride freestyle or are just starting out should definitely think about the Burton and the ThirtyTwo offerings. Those on a tight budget should also give the ThirtyTwo Exit a closer look.

And, more importantly, you should be looking at buying Shred Sole inserts that will address foot support issues directly.